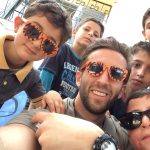 “Ten years ago most people here did not know what this brown paste was,” says Anthony Brahimsha of the chickpea dip that is now nearly ubiquitous on menus in the U.S.

Born to Syrian parents, Brahimsha knew that hummus in the Middle East is much better than that found in American grocery stores. With the help of Mike McCloskey, owner of Select Milk Producers, the sixth largest dairy cooperative in the country, he developed a hummus called Prommus that is higher in protein –– three times that of other dips. It preserves the traditional flavor by using cold pressure, rather than heat, in the kitchen.

“What Halo Top is to ice cream and Chobani is to yogurt, we are to hummus,” Brahimsha says, by way of explaining that Prommus is also changing the industry. Click for article