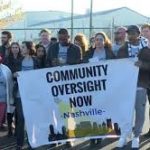 In February 2017, Jocques Clemmons was killed by a police officer after a traffic stop and foot chase in the parking lot of James A. Cayce Homes in East Nashville.

The Metropolitan Nashville Police Department conducted an internal investigation of the incident and the Nashville District Attorney decided not to prosecute the officer responsible for Clemmons’ death.

Clemmons was Black; the officer was white. The same goes for many of the police shootings that have happened in Nashville. Rarely have police been punished in these cases. A 200-page report released in 2016, “Driving While Black,” found that of the more than 700 complaints filed against MNPD annually, 98 percent are decided in favor of the police. Click for article