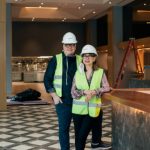 Tony Mantuano was the longtime chef at the Michelin-starred Spiaggia, one of Chicago’s most beloved restaurants, while his wife Cathy ran its lauded wine program. Tony ran the restaurant for nearly 35 years — an uncommonly long stretch in the restaurant world — before they moved to Milan in October 2019 to eat, drink and think about their next act. At the beginning of this year they moved to Nashville, where they are now announcing that they are the food and beverage partners at The Joseph, a luxury hotel opening downtown at the corner of Korean Veterans Boulevard and Fourth Avenue South in early August. Click for article