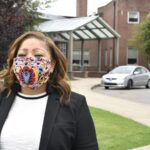 Like many (all?) of us, Dr. Adrienne Battle couldn’t have imagined what was in front of her at the beginning of 2020.

On March 13, 2020, she was named director of Metro Nashville Public Schools (MNPS) by unanimous vote. She had been serving as interim director since April 2019 when she became the first woman to lead the school district, which is the 42nd largest in the country and has a budget of nearly $1 billion.

But think about that March 13, 2020 date again. She officially took the helm just 10 days after tornadoes ripped through Middle Tennessee, leading to temporary closures of schools while the district oversaw building repairs. Then, on March 12, the night before her top job became permanent, schools closed again—before Spring Break—due to concerns about the coronavirus. Click for article