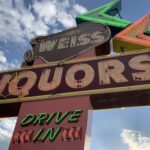 y after Thanksgiving in 2020, a small, masked crowd stood in a liquor store parking lot waiting for a 30-foot-tall neon sign to light up. It may sound odd, but to the neighborhood of East Nashville, this was hope.

When a violent tornado ripped through Main Street after midnight on March 3 of that year, it knocked down the neon sign that had towered above Weiss Liquors since the late 1940s. The store is a Nashville institution, having first served as a speakeasy starting in 1932.

Even before the tornado, Nick Redford counted the Weiss Liquors sign as his favorite. Redford owns Fortify, a design/fabrication shop. “Those huge signs are like extravagant, absurd dinosaurs,” he says. “People just don’t know how to make them anymore.”

Fortunately, Redford does, so he rushed over to Weiss Liquors as daylight rose to offer help. Read article here