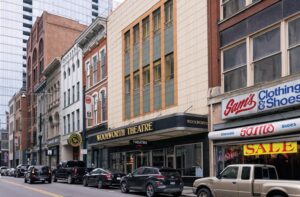 In 2021, Historic Nashville Inc. included the Woolworth building downtown on its annual Nashville Nine, a list of historic sites the preservationist group considers at risk of being lost. At the time HNI wrote: “We recommend that they bring in [an expert] with a specialization in the Civil Rights Movement or Black Freedom Struggle, a trained historic preservationist, and a conservator who can assist with the identification and care of the building’s remaining historic elements. Sometimes, historic preservation encompasses not only a building’s exterior but also respect for the interior where historic events took place.”

Were it not for what happened at the Woolworth in February 1960, the building at 221-223 Rep. John Lewis Way N. likely wouldn’t have made the list. Around the time of his 20th birthday, activist and future U.S. Rep. John Lewis was arrested for the first time in what would become a career of civil disobedience. The Nashville sit-ins — nonviolent on the part of the protesters, although not always by those who opposed them — were a crucial turning point in the national civil rights movement and led to integration of the city’s lunch counters, making Nashville the first city in the South to do so.

In 2020, the Metro Council voted to rename Fifth Avenue — the street on which the building sits — Rep. John Lewis Way. At the time, Councilmember Freddie O’Connell tweeted in support: “The world needs #GoodTrouble right now,” a reference to Lewis’ famous mantra.

But recently, the trouble at the Woolworth building has not been good. Read article